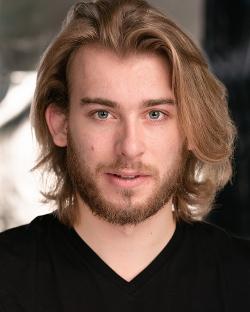 Originally born in Cheltenham and having lived the first few years of his life in the village of Evesham, Jerome has since gone on to live and perform across the UK, China, Japan and various parts of Europe since turning professional in 2016. Jerome trained at the Manchester School of Theatre between 2013 and 2016; during this time he was fortunate enough to be a part of Howard Barker’s UK premiere of ‘Brutopia’ and have been a nominated member for the BBC Carleton Hobbs Radio Award.

Jerome’s previous experience with Shakespeare and classical works is extensive and includes projects with The Royal Opera House, Halle Orchestra, HOME (Manchester), the Phil Wilmott company and a career high point in the form of a 8 month stint as Romeo globally with TNT (ADG Europe)

Over the last year, Jerome has taken a break away from acting; using the time to work as a night carer in a local care home in his family base of Southampton. This will be his first time performing with Dramestics theatre and under the direction of Edward Derbyshire. He is very excited to have been offered the chance to bring theatre to the glorious folk of Gloucestershire.